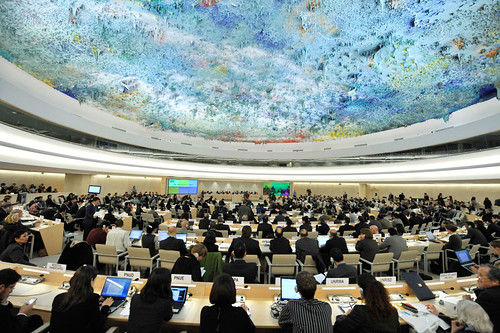 Ok, Hao Nhien, the editor in chief of www.vietnamrightnow.com, just told me to write my next blog on UPR which stands for Universal Periodic Review. A UN mechanism set up only a few years ago to review all UN member states’ human rights record every 4 years. And because Vietnam’s turn is on February 5, 2014 which is actually this Wednesday in Geneva, Switzerland, he thought I should write something about it.

But what should I really write about? Like all UN matters, there’s much to say. But when we really think about it, there ain’t that much to be said if saying is all that’s going to happen. You know what I’m sayin’?

Same with the UPR. Though it’s a mechanism that most countries abide and Vietnam tends to take it rather seriously (apparently they are sending a 30-member delegation this time round), procedures and formalities will certainly be more acutely observed than substance and hard evidence.

So you see. In the interest of time and space (of both yours and mine), let me give you the top 10 things to consider before you embark on any future UPR journeys. Especially if it relates to one-party state like Vietnam.

1. It’s a long one: give yourself plenty of time. Officially, there will be 3 versions considered by the Human Rights Council which is the UN body tasked to take care of it. One is compiled and collated by the UN itself. The second one is prepared and submitted by the reviewed member state. And the third one combines all the reports submitted by NGOs and other civil society voices, be whom they may. If your voice belongs to the third, you must submit your report at least 6 months before the review.

2. But it’s very short: the actual session where the review is done takes only a couple of hours on the day between member states. They may or may not ask hard questions. They may or may not offer recommendations. And the reviewed state may or may not accept any. Heck, even if accepted, it doesn’t mean states have to implement it. Check out Vietnam’s acceptance of many recommendations back in 2009 (www.uprinfo.org), compare that with what’s been happening in the country since and you’ll see what I mean.

3. It’s ineffective: So don’t count on it as the quickest, most effective procedure to date to promote and protect human rights. Like all UN resolutions and conventions, they are only as good as we self-appoint ourselves as serious implementors.

4. And very costly: It will cost you at least 2 arms and a leg to get yourself to Geneva to do any advocacy work prior to the event. Once landed, you regret that you didn’t bring any instant noodles with you because for the first time in your life, you will have to fork out at least $20 for a simple burger (or rather 16 francs to be precise).

5. But it’s not the money that counts: Because in the end, even if you have all the money in the world, chances are you will run into visa trouble. Not only you will have to get endorsement letters from a sponsoring NGO (such as ISHR, CIVICUS, etc.) and the UN (most probably, the Office of the High Commissioner for Human Rights), you must give yourself at least one month for the applicable Swiss embassy to consider your application together with all the fees paid and travel insurance purchased.

6. So be prepared: Not just with what you wanted to say (be brief and concise with actual recommendations written out), but to whom (member states to lobby, UN bodies to meet, and INGOs to guide you), and when (you are allowed to stay in Geneva for only 10 days maximum so it’s best to lobby member states months before via their embassies in your home country).

7. And focus: Prices go up, flights get cancelled, and some bureaucrats love bureaucracy so it’s best to keep focused and stay patient. Even if that means you will have to pay extra, fake a smile, or say sorry more than you would ever care for.

8. Because it’s a journey, not a destination: That’s why they divide the entire process into 3 parts: pre-session (takes place about 3 months before the actual session so INGOs can start lobbying permanent missions in Geneva and give them enough time to get approval from the capital cities), actual UPR (during the session week such as now for Vienam where side events can be organized), and post UPR (in your home country where seminars and workshops can be organized to monitor any progress made).

9. Therefore, process is just as important as result: While results may be difficult to substantiate (because admittedly, it is a matter of perspective depending on where one comes from), the process itself, of learning what UPR means, what its limitations are as well as its potential, of traveling and connecting with those who do care, helps empower the individual with new knowledge acquired, networks formed, and practical skills gained. Knowledge after all is power and lobbying is and should be considered a real profession regardless of its causes.

10. Because in the end, it’s darn worth it: Not just because it is the only world stage where the oppressed are given a chance to be heard – once every 4 years – but where you will find friends and supporters in the least likely places. Friends that you wouldn’t have otherwise met at airports and embassies. And supporters from your own community as well as from the most far flung places on earth. In Oslo, Ottawa, Geneva, South Africa, New York, Washington DC, Melbourne, Hanoi, Bangkok, and many many more places where I and other members on our team have been inspired to do more, not less.

Because we can see that we are not alone. Because we have come to realize that freedom is never meant to be free.

View all posts by Admin VNRN →