(VNRN) – Plainsclothes police pelted an activist’s home in central Quang Nam province on Feb. 11 with large rocks of up to 15 cm-wide (6 in.), breaking the roof.

The four rocks nearly hit Huynh Ngoc Tuan (Huỳnh Ngọc Tuấn) who was at home in his bed at the time, missing him by a meter (3 ft).

“Four police in plain clothes, riding two motorbikes, stopped in front of the house and threw 4 rocks onto my roof,” Tuan wrote in a letter sent by internet. “Two of them are of the paving kind, weighing 1.8kg (4 lbs) and 1.2kg (2 lbs 10 oz), diameter 15 cm and 12 cm (5 in.). These two broke open the cement roofing sheet.”

Tuan, 50, is the patriarch in a family of activists. His daughters Huynh Thuc Vy (Huỳnh Thục Vy), Huynh Khanh Vy (Huỳnh Khánh Vy) and son Huynh Trong Hieu (Huỳnh Trọng Hiếu) are all well-known bloggers who often call for democracy. His sisters and nieces are members of the Women for Human Rights organization. 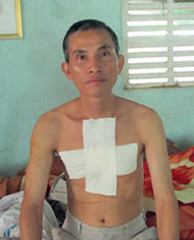 This incident is just the latest in a string of harassment and attacks by the police against Tuan and his family. In April 2013, human waste and rotten fish were thrown into his home. In December, while traveling with another group of former prisoners of conscience to visit another former prisoner in Hanoi, police raided the home, arrested those present, and beat up Tuan. He suffered a broken sternum as a result.

In 1992, Tuan was sentenced to 10 years in prison for “propaganda against the socialist state” after he attempted to send a collection of short stories abroad. The collection of stories reflect life in Vietnam but the government considered it subversive.

Tuan and his daughter Vy were awarded the Human Rights Watch Hellman/Hammett grant for persecuted writers in 2012. When his son tried to fly to the U.S. to receive the awards on their behalf, he was stopped at the airport and his passport confiscated.

View all posts by VNRN Video →